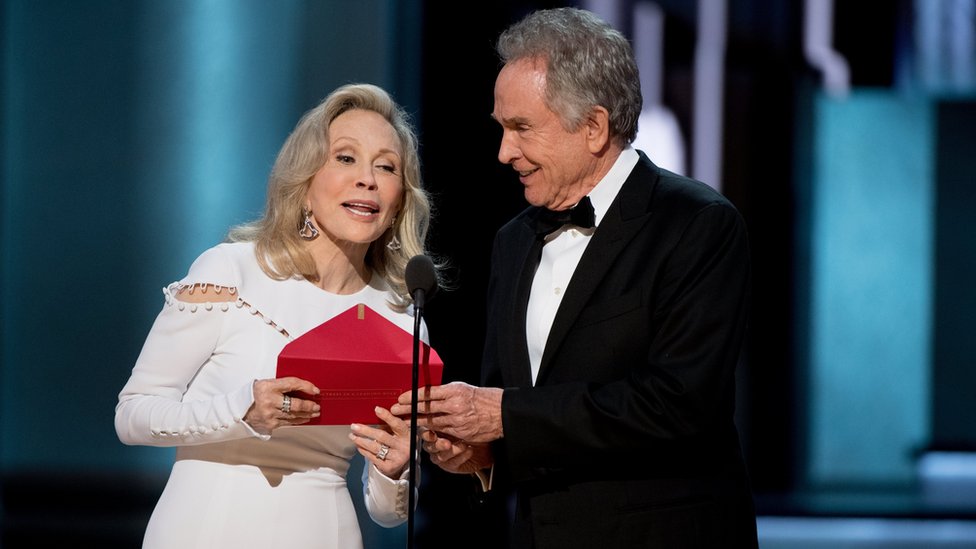 Faye Dunaway has revealed she was left feeling “very guilty” over the Oscars night fiasco that saw the best picture award going to the wrong film.

She told NBC’s Nightly News she was also “completely stunned” after naming La La Land instead of Moonlight.

She was presenting with Warren Beatty but they were mistakenly given the envelope naming La La Land’s Emma Stone best actress.

“You were completely stunned, you don’t know what has happened,” she said.

Dunaway was speaking for the first time since the Academy Awards blunder two months ago.

It has been described as the biggest mistake in 89 years of Academy Awards history.

She told the Nightly News host Lester Holt on Monday how the mistake played out for her and Beatty, her former Bonnie and Clyde co-star.

“He took the card out and he didn’t say anything. He paused, he looked over me, offstage, he looked around and I finally said, ‘You’re impossible!,” she said.

She added that she felt “very guilty” and that there should have been something she could have done to put things right.

“Why didn’t I see Emma Stone’s name on top of the card?,” Dunaway said.

Stone had won the best actress Oscar for her role in La La Land just before the best picture announcement.

Beatty has already said the night felt like “chaos” when he was a guest on the Graham Norton Show earlier this month.

An investigation into the mistake later found the holders of the top secret envelopes, two accountants from the LA auditors PricewaterhouseCoopers (PwC), were responsible.

Martha Ruiz and Brian Cullinan were standing at either side of the stage, out of view, where they handed out the winners’ envelopes to the presenters of each award as they went out on stage.

Duplicates of each award envelope are made, which led to the second copies of the previous award being handed out instead.

The firm apologised for the blunder and accepted full responsibility and the Academy said they will continue using PwC despite the mix-up.

Cullinan was posting Twitter photos just before the mix-up. He and Ruiz will not be working on Oscars night again, PwC has also said.