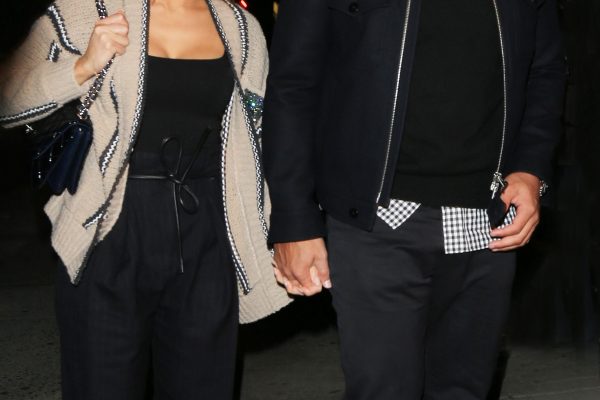 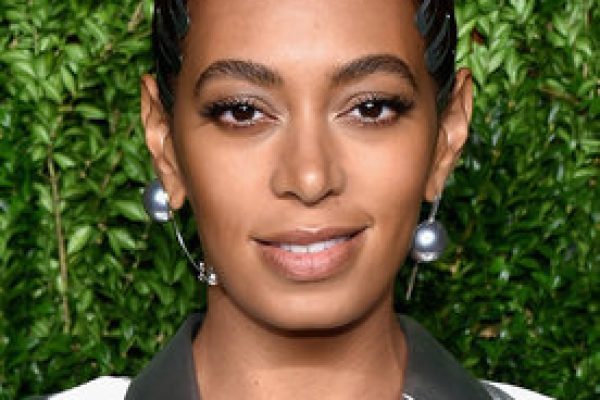 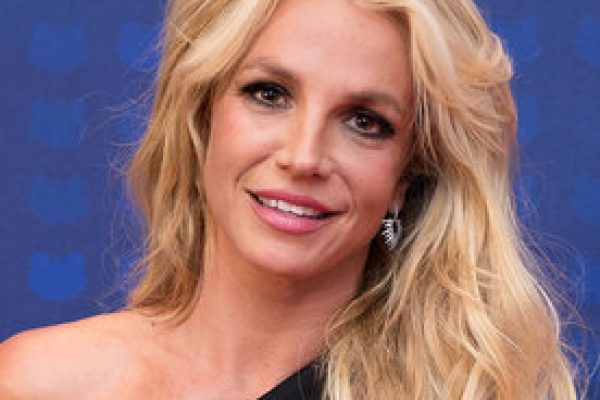 All we can say is damn girl.

Following her super glam appearance at The Radio Disney Music Awards to receive the first-ever Icon Awards over the weekend, Britney Spears wasted no time getting back into the gym. The “Slumber Party” singer took to Instagram last night to post two snaps of herself working on her fitness, and you can consider us very impressed. The 35-year-old wears the same stomach-baring ensemble in each of the photos—an embellished hot pink sports bra and teeny tiny gray athletic shorts—as she shows off her very toned midsection and remarkable ability to do the splits.

“Back at the gym…. stretch and run all the way,” the mother of two wrote alongside the images, proving that the tricky move is no big deal when you’re the Princess of Pop.

But this is hardly the first impressive exercise feat that Spears has mastered. Handstands, backbends, weight lifting, pushups, and more are also part of her workout repetoire.

RELATED: Jamie Lynn and Britney Spears Were Twinning at the Radio Disney Awards

We can’t tear our eyes away from her abs. 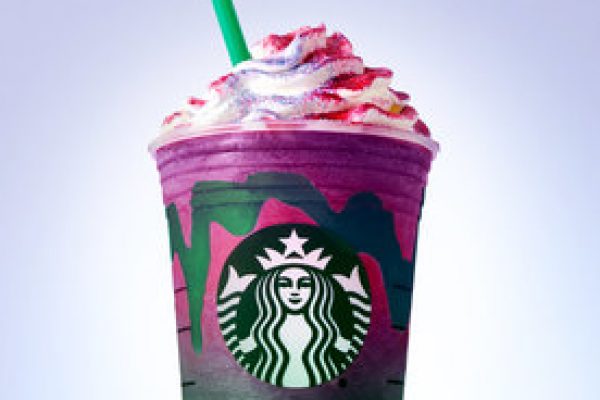 Yep, there’s a new and vibrantly colored Frappuccino on the market, and you might actually want to drink this one.

In honor of the wildly photogenic frapp, we took a look back at the coffee chain’s most memorable (and outrageous!) drinks.

Scroll down for a lifetime of memories (and maybe a tiny bit of nausea).

This mild-mannered beverage is made from a blend of strawberries and cream, white chocolate sauce and matcha drizzle, and whipped cream topped with matcha powder. Sounds pretty delightful, tbh.

Yes, Starbucks once offered an Oprah-themed drink, because OPRAH.

The name brings back some less than pleasant memories of trips to the county fair, but the ingredients actually sound kind of good—it’s just a Vanilla Bean frapp with raspberry sauce. Yum!

We kid you not. The Baby Vomit Latte contains 17 different ingredients—order if you dare.

No cultural phenomenon should pass without a frappuccino in its name! The Pokémon Go frapp has a vanilla bean base mixed with berry syrup.

From what we can tell, this elusive frapp has a green tea base blended with berry syrup. 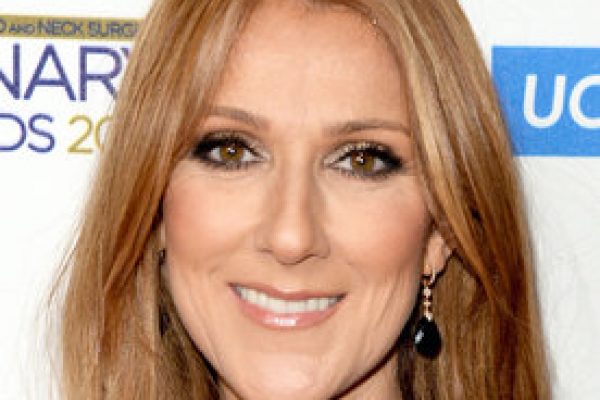 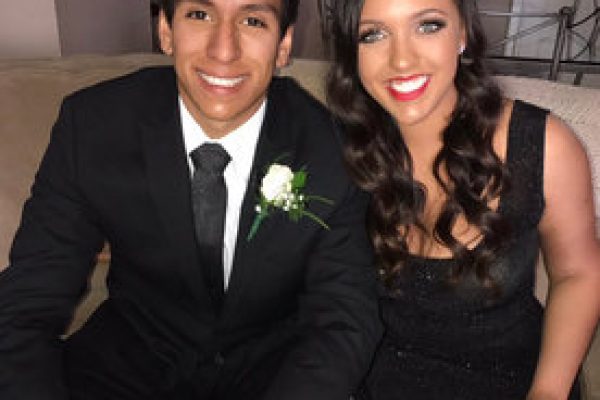 Ally Johnson gave her mom, Lori, an amazing early Mother’s Day gift when she wore her vintage prom dress (circa 1995) to her own prom this past April.

Surprisingly, it took very little cajoling to get Ally to agree to wear the dress.

“I tried it on and it fit perfectly,” Johnson told TODAY Style. “It didn’t need any alterations. I just loved it from the second I tried it on.”

Lucky for Ally, the dress is totally “in” by today’s standards—not a shoulder pad in sight.

“People were shocked, they didn’t think that could have been my mom’s senior prom dress,” Johnson said. “It was back in style. It’s a vintage, old Hollywood look.”

“We went to a vintage store and my mom found this dress and she loved it. At first, I was like, ‘I don’t know if I really like that dress,’ but I tried it on and I absolutely loved it,” Lori shared.

Could the dress take on yet another seminal high school experience? Oh, yes.

RELATED: This Teen Wore a $2,000 Kylie Jenner-Inspired Jumpsuit to Prom

“Even if my daughter doesn’t want to (wear the dress), I’m going to make her,” Ally said. “Now we have to!” 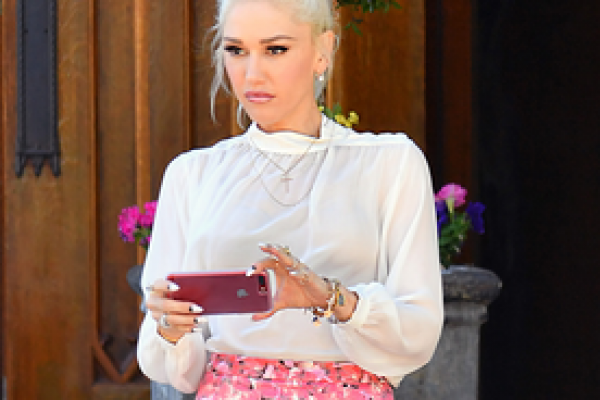 Gwen Stefani broke out her best church clothes for her sons’ first communion yesterday, and she was basically the embodiment of springtime.

The 47-year-old mother of three wore a white and pink floral outfit as she proudly watched her two sons at church on Saturday. Stefani’s ensemble included a simple white blouse tucked into a pencil skirt with a pink flower motif, and she pulled the look together with matching pink heels and a few delicate flowers in her hair. At the religious event, both 10-year-old Kingston and 8-year-old Zuma made their first holy communion, and you can tell their mom was bursting with joy!

Stefani posted plenty of snaps throughout the day, capturing the kids in their adorable first communion outfits, as well as the stunning church where the ceremony was held. She also posted a few selfies, showing off her voluminous lashes, bold brows, and flawless complexion. Stefani is definitely one hot momma! 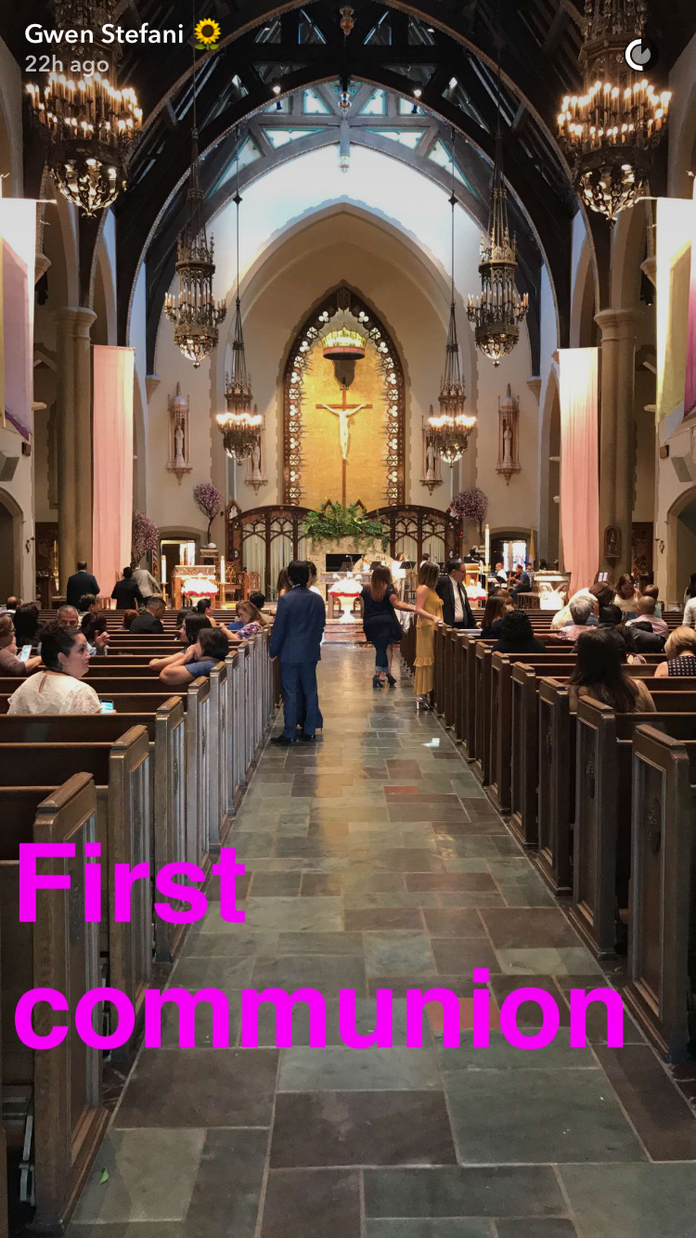 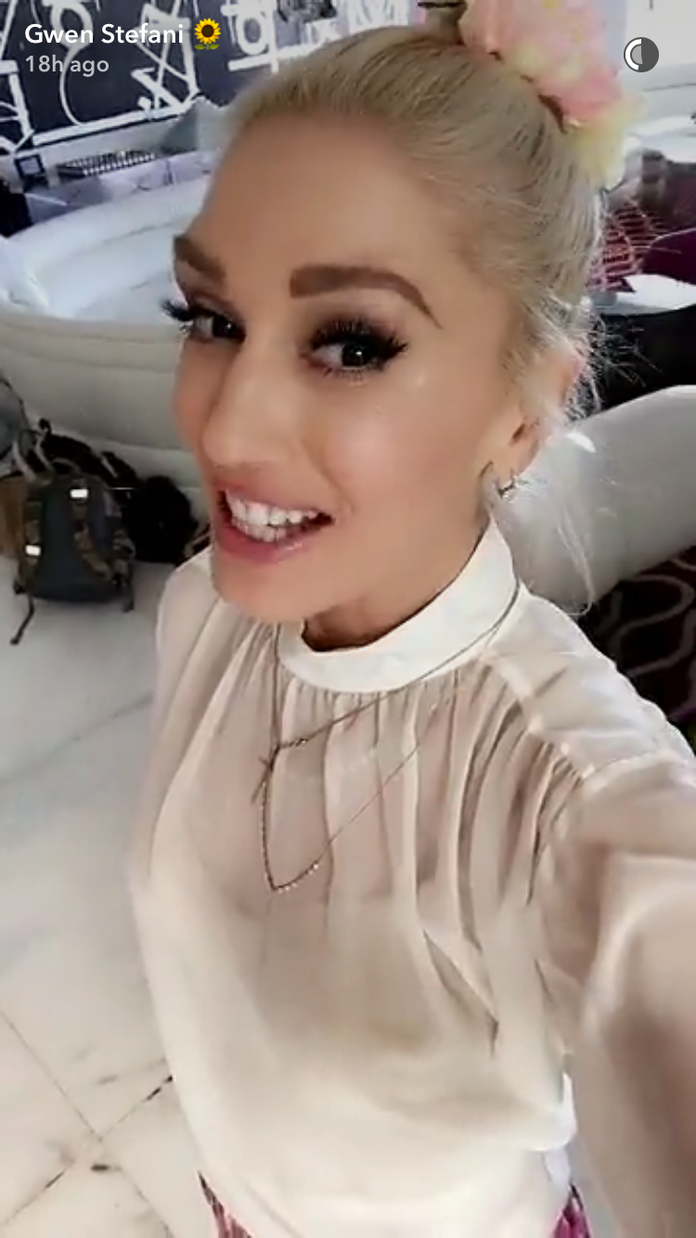 After church, the family celebrated the boys’ milestone together—all in all, it looked like they had an amazing and memorable day. 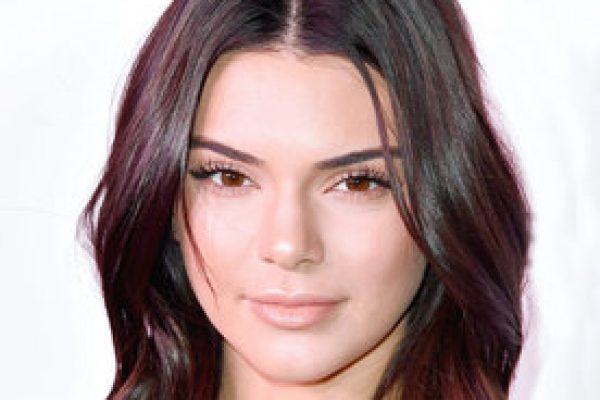 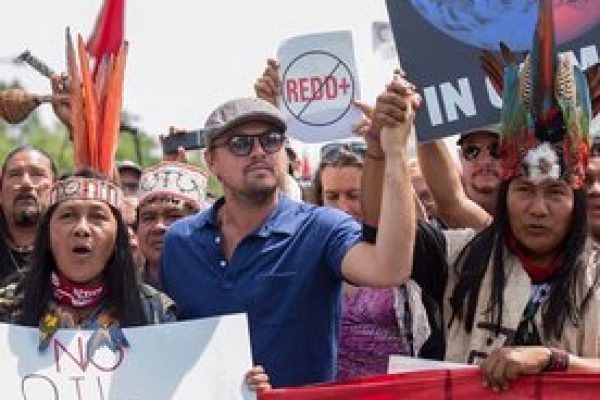 Leonardo Dicaprio never misses an opportunity to advocate for the environment, and so it should come as no surprise that he was on the front lines of the Climate March in Washington, D.C., yesterday. The 42-year-old actor and environmental activist spent his Saturday meeting with indigenous leaders and marching along the streets of the capitol, and all we can say is #Swoon!

Dicaprio started his day by sitting down with the leaders of several indigenous tribes. The Titanic star kept his attire casual and practical, wearing a blue polo shirt, a golf cap, and sunglasses. He shared a group shot from the meeting, writing that “today, we march to keep fossil fuels in the ground, to fight for a transition to 100% clean energy by 2050, for climate justice and so much more.”

Then, Dicaprio took to the streets with other marchers, carrying a sign that read “Climate change is real.” He shared several pictures from the march on Instagram, writing that the event left him “inspired and hopeful for our future on this planet.”

He’s talented. He’s passionate. He’s handsome. And when Leo believes in a cause, he gives it his all. As if we needed another reason to swoon over him! 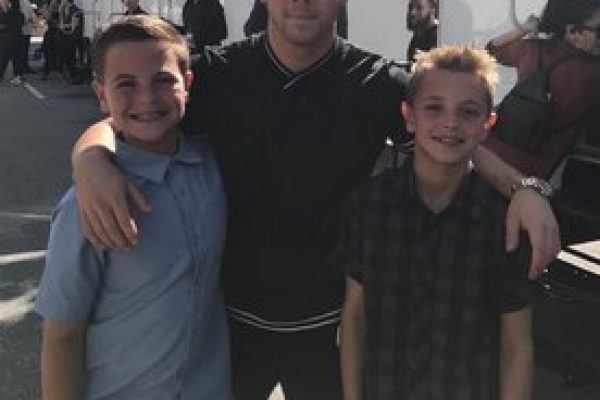 The Radio Disney Music Awards took things up a notch this year with its first ever Icon Award, given to none other than Disney darling Britney Spears.

Stars like Natasha Bedingfield, Noah Cyrus, and more descended on the Microsoft Theater in Los Angeles on Saturday afternoon for the show, and dished on why Spears was deserving of the honor as they braved the scorching hot temps on the red carpet. 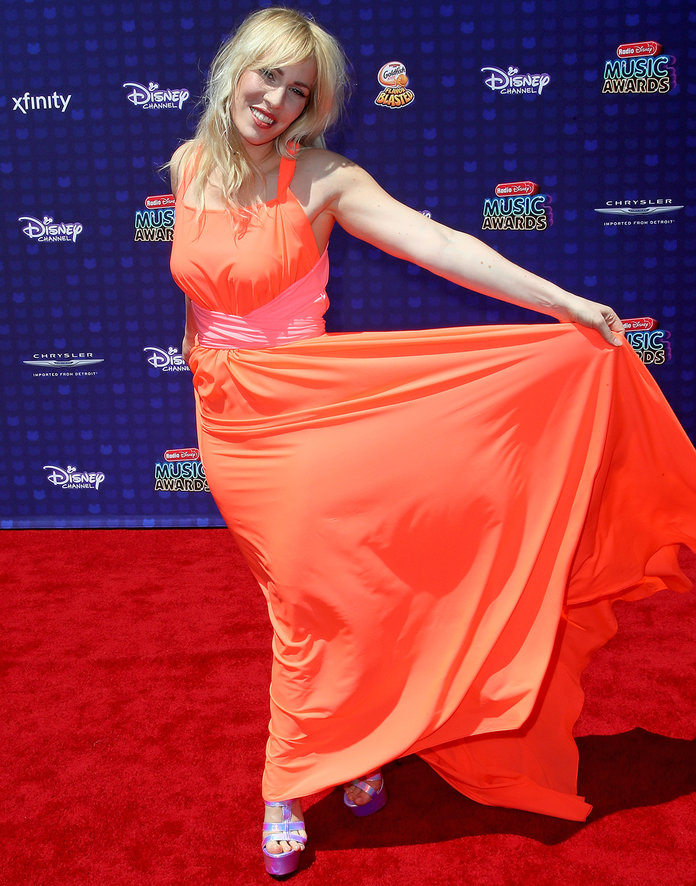 “Britney is an icon,” Bedingfield, who rocked a flowy orange Olena Dats dress, told InStyle. “If you say icon, Britney is the second word that’s going to come to your mind. It’s going to be Madonna, Britney, Prince, Michael Jackson. She has that thing. She reflects a time, I think, for us.”

Miley Cyrus’ younger sister, Noah Cyrus, who was nominated for “The Freshest – Best New Artist” award, echoed those sentiments, telling us, “I think, she’s been such an icon since I was born. I think she’s amazing. No matter what generation or what year you were born into, you know Britney Spears. I think everyone hopes for their career that they’ll one day be as iconic as Britney.” 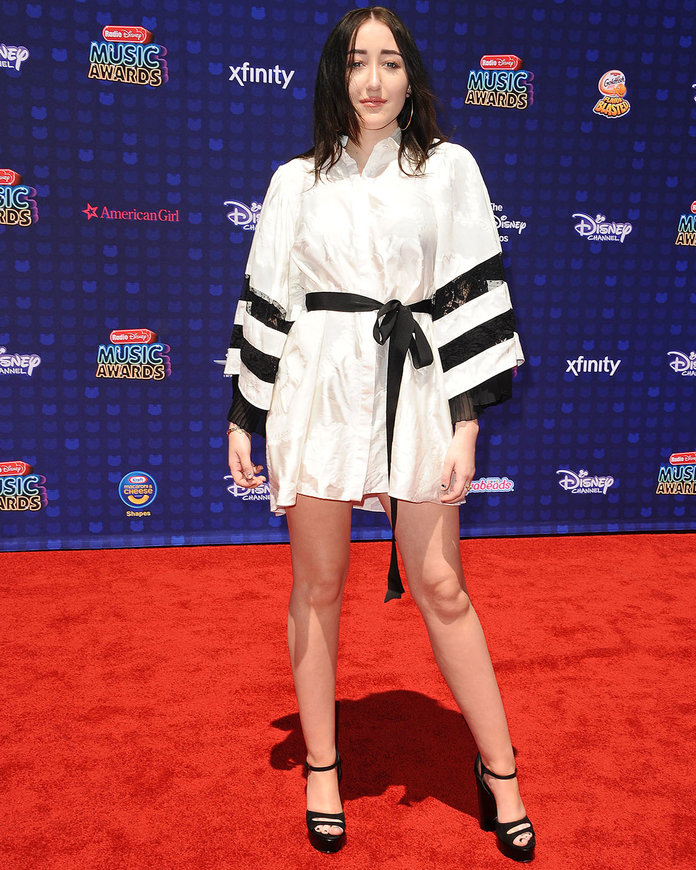 Cyrus, who sported a black and white Adam Lippes shirt dress with black Ruthie Davis heels, was just one of the stars who showed off their personal style at the event. Sabrina Carpenter flaunted hers too, in a red, off-the shoulder jumper she said was a tribute to Spears’ “Oops! I Did It Again” music video (nailed it). “I just kind of wanted to have fun because it’s the RDMAs. There are so many cool looks and sparkles, it’s a lot to handle. I also wanted to match the carpet, apparently,” she added with a laugh. 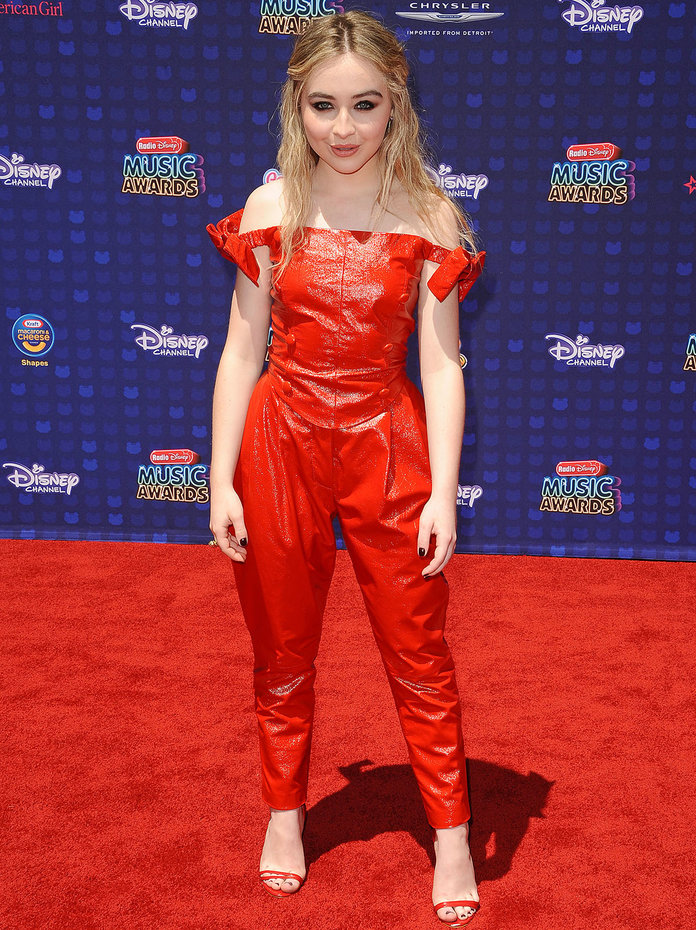 As for the other style stars at the show, Dove Cameron wowed in a structured, off-white mini dress paired with black heels and a black belt, and Hailee Steinfeld was on trend in a metallic bronze dress. 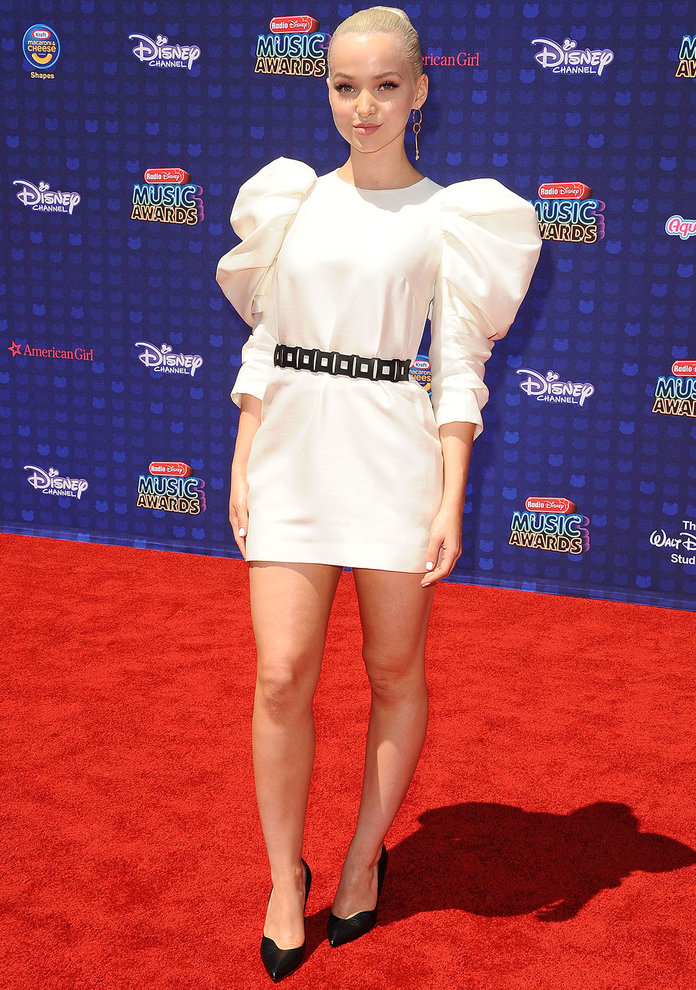 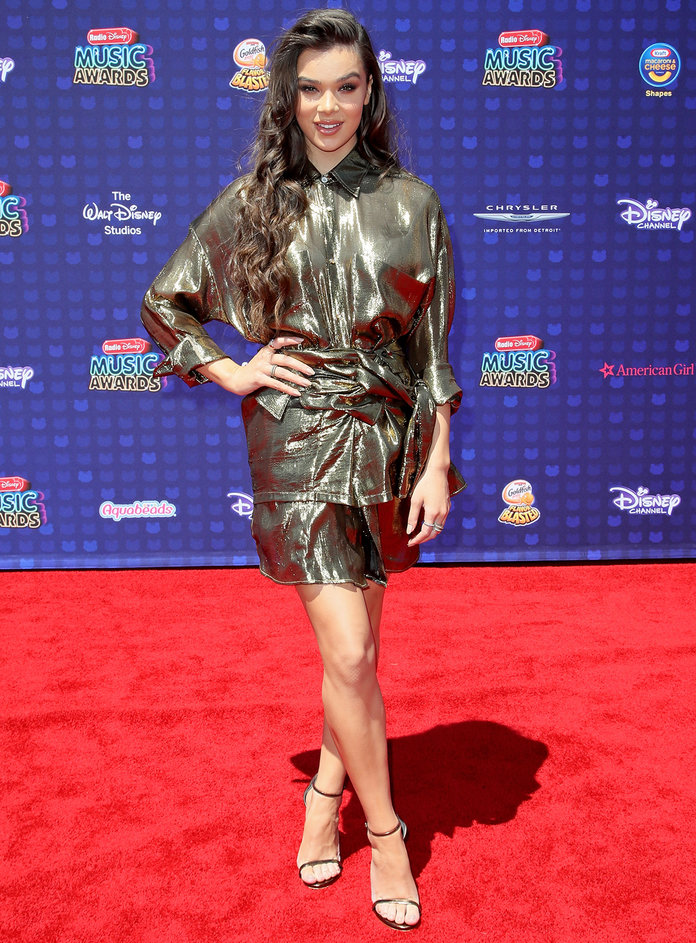 The woman of the night—Spears—also stunned in a sleek, black, one-shoulder dress paired with black pumps as she picked up her award. The “Make Me” songstress brought her sons—Sean, 11, and Jayden, 10, with her to the show, and they couldn’t resist taking a snap with Nick Jonas (who won the Hero Award) backstage. 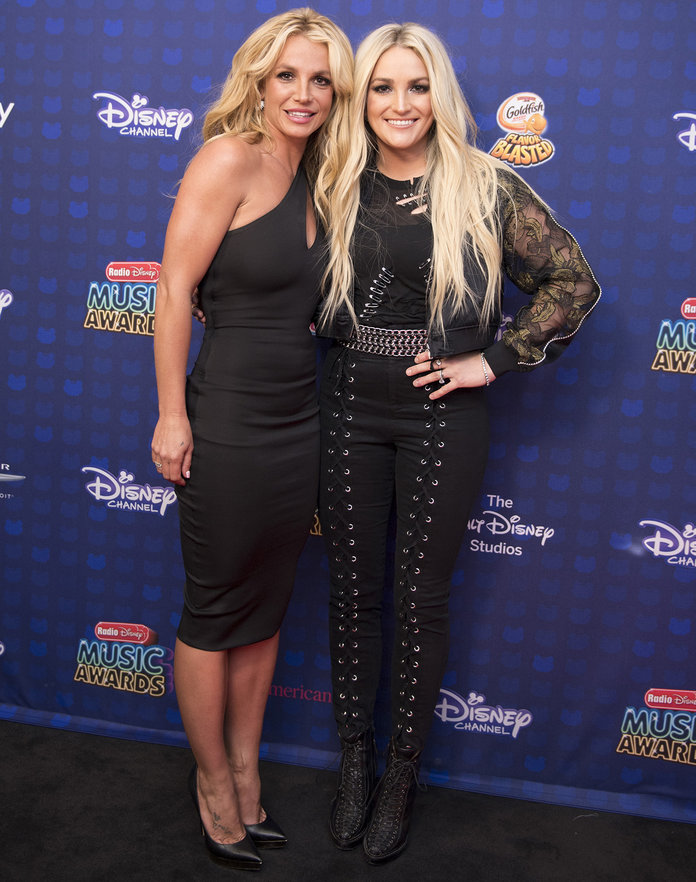 Take a peek at the full list of winners:

“She’s The One – Best Female Artist”

“The Bestest – Song Of The Year”

“The Buzz – Breakout Artist Of The Year”

“So Happy – Best Song That Makes You Smile”

“Stuck In Our Heads – Best Song To Lip Sync To”