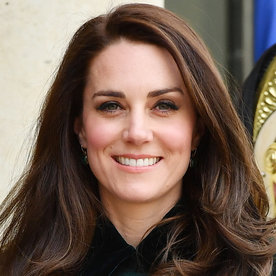 The British royals want you to know it’s OK to say you’re not OK. Last week, Kate Middleton, Prince William, and Prince Harry launched a film series in collaboration with Heads Together called #oktosay, which features people speaking about the life-changing conversation that helped them cope with their mental health issues.

Two new videos, launched Wednesday, feature two real-life individuals being honest and open about their struggles in hopes of reducing the stigma around mental health. In one short film, professional soccer player Rio Ferdinand speaks about finally opening up to his friend about his emotions, months after losing his wife to breast cancer.

In another, Katharine speaks to her mother Caroline Welby about living with depression and anxiety for 10 years as a police officer, and how finally telling her mom about her mental illness helped her begin to recover.

“We have seen time and time again that shattering stigma on mental health starts with simple conversations,” the royals said in a joint release when launching the film series. “When you realize that mental health problems affect your friends, neighbors, children, and spouses, the walls of judgment and prejudice around these issues begin to fall. And we all know that you cannot resolve a mental health issue by staying silent.”

“We hope these films show people how simple conversations can change the direction of an entire life,” they added. Watch all 10 films on Heads Together’s YouTube page today.