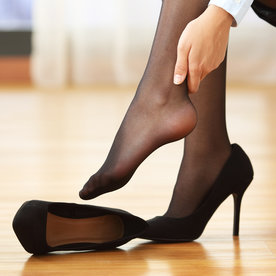 “In some workplaces in our province, women are required to wear high heels on the job. Like most British Columbians, our government thinks this is wrong. That is why we’re changing this regulation to stop this unsafe and discriminatory practice and adding an enforcement element by WorkSafeBC,” Premier Christy Clark said.

VIDEO: Working from Home Can Make You Even More Stressed

“The requirement to wear high heels in some workplaces is a workplace health and safety issue. There is a risk of physical injury from slipping or falling, as well as possible damage to the feet, legs, and back from prolonged wearing of high heels while at work,” the statement read.

Now, women can wear whatever footwear they want to work, without being forced to shove their feet into an uncomfortable pair of heels by their boss.

RELATED: Is There Such a Thing as a Truly Chic Flat? We Investigate.

We’re shopping for some new flats to celebrate.